The concept for the film

Western Australian Museum curator of Minerals, Dr. Peter Downes, proposed for a video to be featured in the “Origins – Land, Water, Sky” exhibit of the Museum.⁠ The concept of the video is to relay what motivates a lapidarist to practice their craft, a journey shared rather than explained. This idea gained the support of the group that designed the new mineral/gem gallery.

Upon deciding to run with this idea, WA Museum enlisted a film crew from Sandbox Productions. The brief was to compile a short video on gem faceting. We set a date for filming to take place at our Desert Fire Designs workshop in early 2020.

The day finally approached. Before the camera started rolling, the videography crew and I reviewed the production brief again. They were very professional, relaxed, and down-to-earth which helped to settle some of my nerves. Constantly reviewing oneself on a screen, even a little one, is a blunt reminder of many things – most of them too personal to share. However, as my lovely partner, Emma reminds me, I survived.

Nerves aside, I am incredibly honoured to be able to share and contribute some of my knowledge to the world of geology and gemmology. Participating in this film project has been a great and rewarding experience. 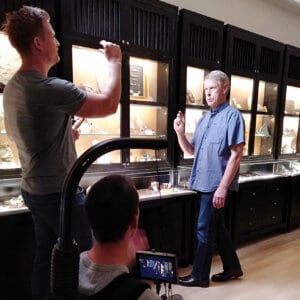 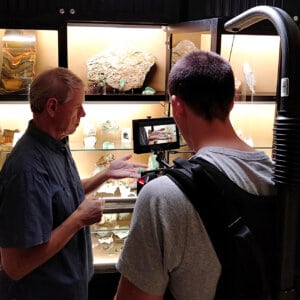 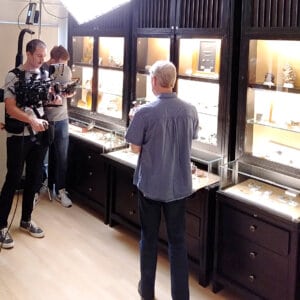 The new WA Museum named ‘Boola Bardip‘, took 5 years to construct and is an architectural wonder! It’s an amalgamation of a whole block of the old North Perth City precinct with an overarching 5 story construction. ⁠Boola Bardip means many stories in Whadjuk Nyoongar; the Country on which the Museum sits.
⁠
I highly recommend you check out the museum if you haven’t already done so. With so ‘many stories’ (pun intended), artifacts, and displays housed in this impressive building, you’ll easily spend a full day there.
⁠
In regards to my gem faceting video debut at the museum, make your way to Level 2 – “Origins” exhibit. Towards the rear, you will find the rock and mineral specimens originating from our wondrous West Australian geological landscape. There is a TV screen located here which shows my gem faceting video.